In the summer of 2002 I discovered that motorcycling would probably be fun, so I took a drivers licence at MC-skolen, and passed my final drivers test on August 8th 2002. On September 14th 2002 I spent most of my savings buying a Suzuki Bandit 600. It's from 1998 and had driven approx. 13,500 km. My motorcycle career was off to a good start.

I then joined Polyteknisk MC Forening (PMC) - a motorcycling club at my, now former, university. My membership has turned out great. PMC has a lot of really nice members that I enjoy spending time with.

This is what my old Suzuki looked like shortly after I bought it in 2002: 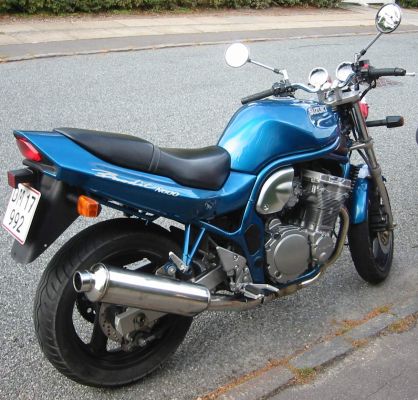 This page is brought to you by GNU emacs, Linux, Apache and PHP.
It was made by Jacob Bunk Nielsen.